How Do Transponder Keys Work? 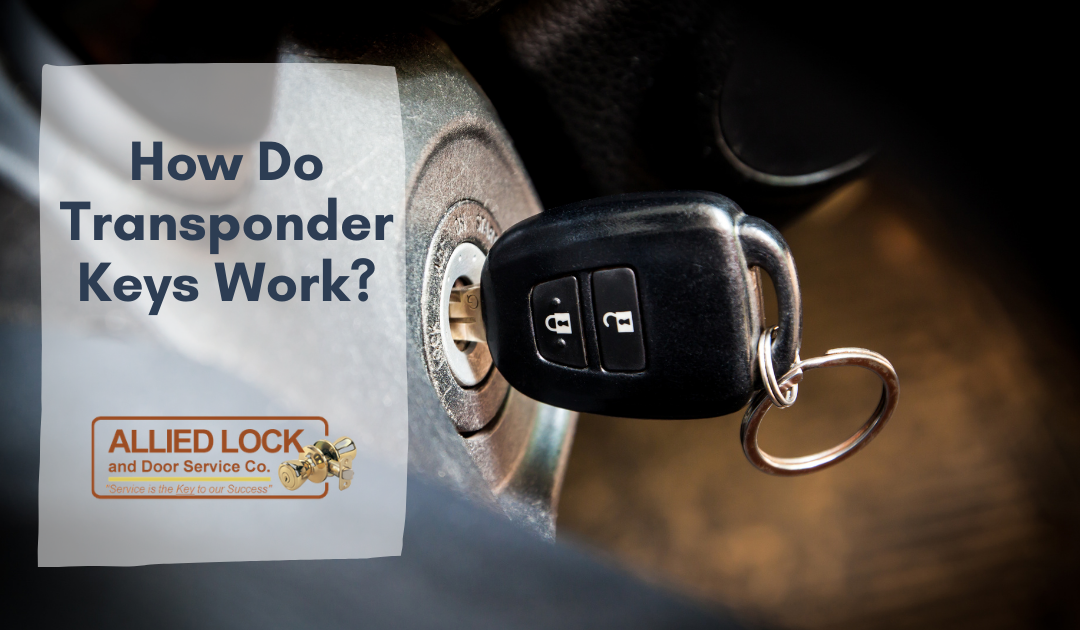 Commonly seen in newer vehicles and some home and business alarm systems, transponder keys hold several distinct advantages over traditional key and lock systems as well as key remotes. These are different from conventional keys since they don’t always retain the classic “key” shape and do not operate on any sort of button remote system. Instead, transponders allow you to start your vehicle from within a short-distance using only radar frequencies which are often, but not always, triggered by inserting a physical key into the ignition.

Transponders aren’t new technology; these were actually invented in World War II when the military used to differentiate allied planes from enemies on the radar. These devices emitted unique signals back to the command center, which was then used to inform their pilots of enemy positions.

Modern transponder keys, such as the one you use to start your vehicle, work the same way—albeit they are significantly smaller in scope and scale. Transponder keys are also very low powered to ensure that the car does not start without the microchip being near enough to the receiver.

How do transponder keys work?

When you insert your transponder key in the ignition, the microchip inside your key will send a signal to the receiver, usually near the steering column. Each microchip is programmed to work for one specific vehicle, which contains its serial number. Your car’s receiver chip needs to recognize the transponder key’s signal once you insert it into the ignition, or else, it will not start!

Transponder keys make it more difficult for car thieves to steal your car because they are much harder to duplicate than regular keys. Whereas any shopping mall key-cutter can fashion a duplicate out of your original keys in a few minutes, transponder keys need to be programmed by a car key programmer to work properly.

Car key makers who offer transponder key replacements will use specialized equipment called Transponder Key Programming machines for this purpose. The complexity of the process varies by vehicle make and model. Some cars will require the use of two working keys, while others require a unique pin that is available to the dealership or programmable by your trusted automotive locksmith.

The complexities in duplicating transponder keys make it essential that you keep extra transponder keys just in case you misplace one. If you only have the one that your dealer gave you, then ask for duplicates or call your car key programmer immediately. You don’t want to be stranded and unable to drive your car in the middle of nowhere if you ever lose your transponder key and not have any spares.

Before key transponders came along, stealing one’s car was as easy as creating a duplicate of the original key through impressions. More enterprising thieves may not even need a duplicate key! Unfortunately, Hollywood movies weren’t lying about this one: it’s relatively easy to open a locked car with nothing but a few hand tools. Once that’s done, a car thief could quickly start the car by hot wiring it.

Car key transponders reduce the likelihood of your car being stolen because of the added complexity. Without your transponder key, your car will refuse to work and cannot be hotwired!

That being said, no vehicle is genuinely theft-proof. If you’re away from your car for a long time and left it in an unsecured space, nothing is stopping a car thief from simply towing your car away. Some car thieves have also devised ways to bypass the transponder key, though they will still need specialized equipment to make a duplicate to fool the car system.

As discussed above, no car is truly theft-proof. The important thing is to know how to prevent these thefts from happening to you. For example, if you lose your car keys, ensure that you take your vehicle to your trusted automotive locksmith and immediately get a car key replacement. Ensure that your automotive locksmith is also a legitimate car key programmer—that way, any lost or stolen keys can no longer be used to start your car!

You never want to get stuck without a spare key transponder. To avoid such an occurrence, get a car key replacement from your local Cincinnati locksmiths, Allied Lock and Door Service Co.! Besides doing car key replacements, we also work with Door Locks, Home Safes, and more. Contact us today to learn more about our products and services.